GBridge (German Bridge) is a variant of the bridge games (card game). The rule of the game is quite simple, yet it is hard for one to master. Materials of this game are not easily found and thus players need to develop by themselves.

In the beginning of a round, a suit (spade, heart, diamond or club) is randomly chosen as the trump suit. Then each player bid by turn to state how many tricks will be won by that player during the round. The player has the option to bid from zero tricks to the total number of card distributed. There is one limitation on bidding, for the last player to bid, it does not allow to bid the number of expected win tricks so the sum of all the players' bid tricks is not equal to the total number of card distributed (that meant at least one player must lost).

After the bidding, it is the time to play the card. The aim of the play to win exactly the number of tricks. The player who bids first will lead a card from hand (there is not limit for a player to lead a card). The play is then continuing in clockwise. The next player needs to play a card, however, it is required to follow the leading suit. If there is not suit to follow, one can play either a discard or a trump (if the leading suit is not a trump suit). After the each player played a card, their cards will compare to see who wins the trick. The comparison rules are simple:- discard will always loss; trump suit will always win; if on the same suit, compare the cards' strength (A, K, Q, J, 10, 9, 8, 7, 6, 5, 4, 3, 2 from biggest to smallest). The winner of the trick will lead a card for the next trick. After all tricks have been played, a new round will start.

The turn score is very simple according to the following two equations:-

1) For winners in a round, winning tricks is equal to bidding tricks (just make):-

2) For losers in a round, winning tricks is not equal to bidding tricks (up or down):- The turn score will be accumulated to the total score.

The game interface of the We We Web is simple, use mouse to click is ok. The game is fixed to four players. If not enough human player, robot will take the role. When it is the turn for a play to bid, bidding boxes will appear on the top of the cards. Click on one of the box to bid. After all players have been bided, it is the playing stage. One can click a card to select it, and click once more to play it. That's all, is it simple? 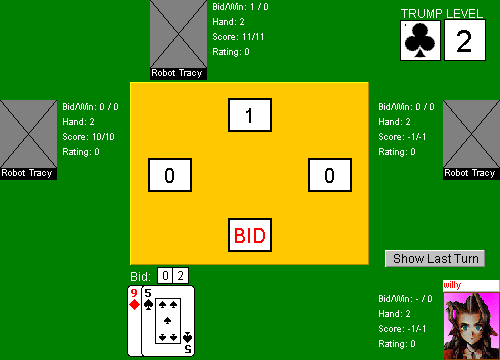 We have searched the web, however, there is no much information available. If you find some useful materials, feel free to contact us.